Then my friend typed Pakistan, I snatched the phone from her before she could press the send button. Bel was reading a WhatsApp conversation I was having with a Facebook friend to whom I gave my number on Facebook, because he sent me a friend request, I looked through his profile and I concluded he would be a great network, because among other things, he was having a consulting firm. – At the start-up stage though. My Alatsa smartphone would not allow me to post screenshots of our conversation.. So after saying hi,  and formalities, we exchanged contacts.  He asked why am I awake by this time as a married woman ( FYI, the last time I checked, My status was: Single on Facebook and everywhere else. I haven’t posted any images of my husband and I. In reality or fiction, I have always being Unmarried). Sensing that the conversation would take a courting tone to a coy mistress, I played along as a married woman, and the tone marginally respectful until three days’ time when I decided not to carry lies into 2019,  then I dropped the dreaded African disease. I am not married. Then he sued me for lying. Bailout? Banging. What do you mean? I asked? He replied.

I don’t remember what we talked about again, because I stopped talking with him that night.

WHY DO YOU THINK I WILL RAPE YOU OR WHAT?

“You started with the rape. I just want a comfort zone.” I hit back

Well, I have read somewhere that when meeting people for the first time, meet them in neutral places, to guarantee the safety of both parties, and even in negotiations, so no one has a greater advantage due to familiarity of environment. 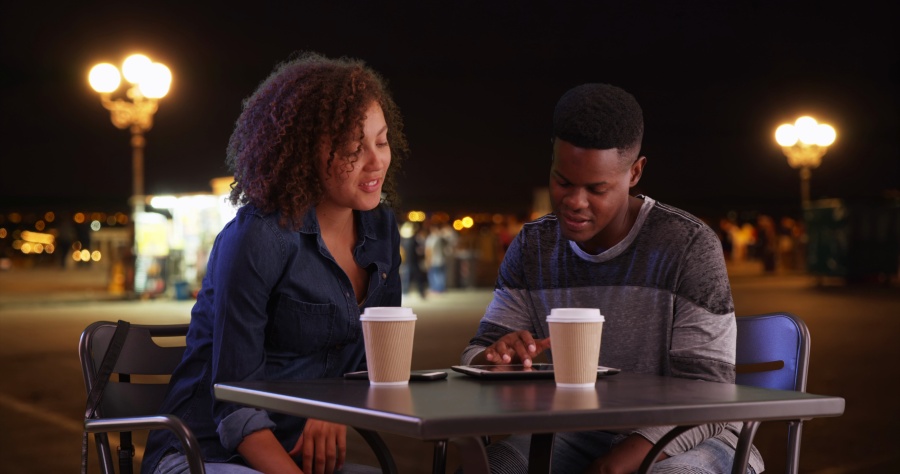 When he finally realized the battle is the Lords, he signed off .    “Ok, I wont force you for me to help you. Blah blah blah.So also signed off elegantly. He asked me for meaning, I told him. Then he blew a loud siren: Wow, which country.

That was when my friend wrote Pakistan. I was hurt, I told another friend later, and instead of sympathising with me, she narrated her ordeals too. Similar.                                  This brings  to mind the blind Biblical argument which gives no room for respect for ladies.

MY GIRLFRIEND IS A VIRGIN

I used to see this guy. He looked respectable, Well-dressed. He is a church guy. But not from the branch I worship. ( Church boys are supposed to be well groomed. I remember when I was in my teens, there was one rough playing young man, the only time he would let go of wringing my arms was when I hollered: Respect women, girls and children; A line from their theme they always recite in class before their young men class begins. I had memorized that line especially for my young men friends. It worked. At least, with me. ) Our paths normally cross. I know his fiancée. ( So therefore, I was not thinking of any possible hook-ups with him) One day, he lamented as to why I didn’t have his number. I took it but forgot about him. He met me another time, and gave me the number again. This one, I messaged him that night. He replied. We had normal light hearted conversation until the third day, when he started. I should come to his house, Prepare Fufu for him (My mom’s mortar is tucked under my father’s bed. Gathering dust while I prepare my eternal banku), warm his bed, sex positions. I showed the conversation to two of my male friends. (I was hurt. You know I am normally hurt when guys see me as a cheap good for nothing except sexual tool lady. I am forced to re-access my speech, dressing, conduct to know where I miscommunicated my inner self by misrepresenting it) One suggested I ask my fufu eating friend if he has these sexual conversations with his girlfriend and another said I should ask him the last time he slept with his girlfriend? My gentle-dressed-fufu eating-church member friend:                                                                 “No ooh. My girlfriend is a virgin, the most virtuous woman I have ever met.” Hmmmm….And the accolades poured in like torrential rains over my bald head…   Adenya ,the cheap slut never engaged in a WhatsApp conversation with him again. He disrespected me and it was difficult to forgive him.

It is my right that I demand respect from men which I have eternally earned. Since men are also crying loudly now, a graduation from the whimpering, and sobs of want of some all expense paid trip to the restaurant by their female friends, lovers and colleagues, (T.L.C, Tender Loving Care) Don’t we also deserve to cry out loud for some respect and decorum? If that is how you will show love to us, Keep your love, and give us the Respect you expect from your male colleagues.  When it’s business time or formal times, let’s keep things formal between us. Compliment us based on the purpose of the conversation. Don’t forever give a lecture on her dimple when you are at a business negotiating table, you are sending the focus of the meeting in a wrong direction.. You are saying she doesn’t have any thing to over to the group apart from her “enchanting smile”. That is her arsenal. It is inappropriate. It is disrespecting her intellect. She needs to be measured beyond her physical features same as men. That is respect. The arm length professional respect. Since most offending men are supposed educated men, A suggestion is made to come to Ghana Institute of Journalism or go to School of Communication studies, University of Legon, take a short course  to understand the effective use of personal space in communication.  Or you can google. You can reflect on your personal life when someone invaded your personal space. You were pissed right? You might rant and say: Keep shut your beak. Who are you to speak on behalf of over 4billion women?  And a female reader might say: Who told you we want respect? Na respect we go chop? Maybe not. Or Maybe. 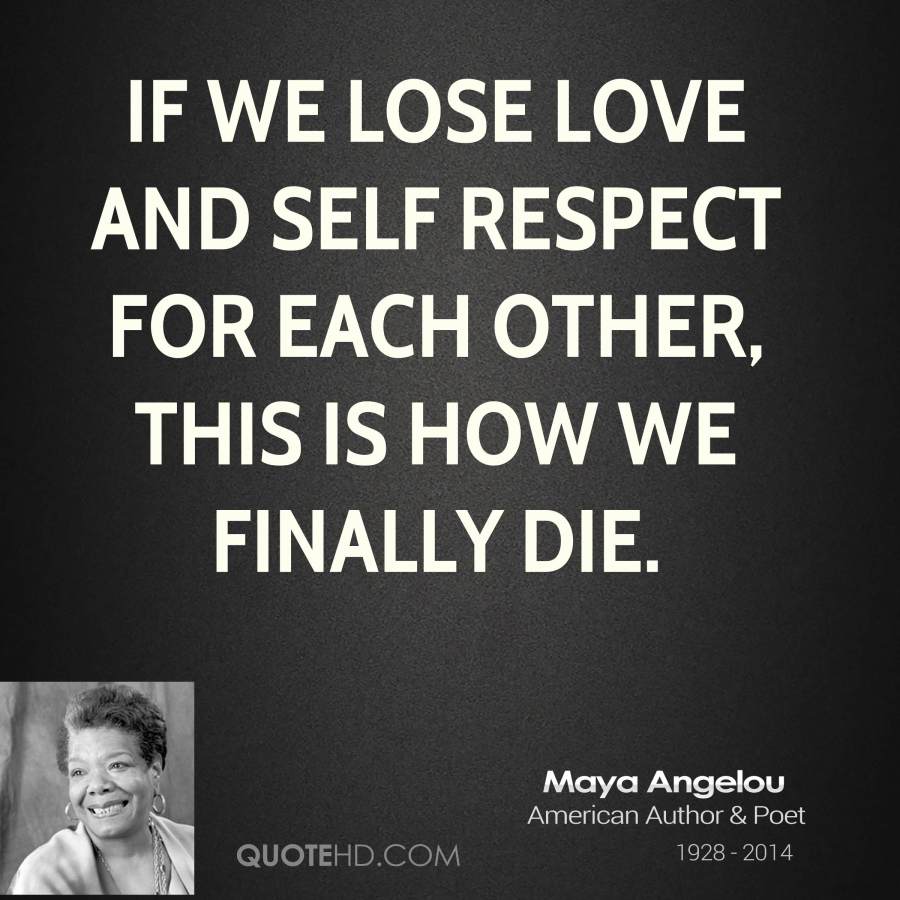 HER DECORUM, HIS DECORATION 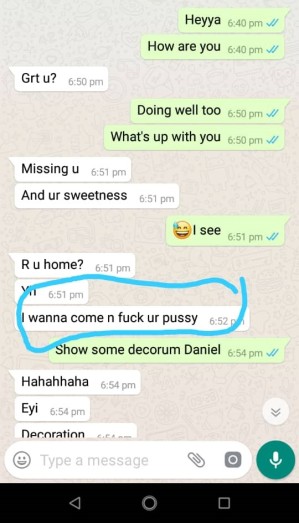 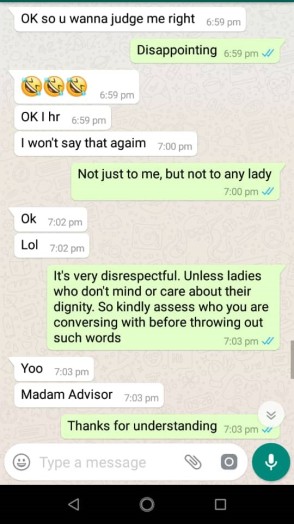 MORE THAN A FAVOURITE COLOUR

I saw a joke of a guy asking a lady her favourite colour: She shuts the guy and asks him to ask her intelligent question. The guy asks her a complex maths question. The girl responds: My favourite colour is brown. It seems funny. But guys, please ask us intelligent questions. Continue to ask us intelligent questions. It is only a fool who thinks it is a shame to say I don’t know. Don’t ask us our favourite colour or the colour of our G-Strings in the initial conversations. You make us look dump. Yes of course, since there are men who do dump stuffs , there would be girls who do dump stuffs too. We agree. If you ask me, Adenya, my favourite sex position before the end of my first conversation with you, I will dump-zone Some of us want our intellectual G-spots to be stimulated instead.

a woman  doesn’t  curl her feet at and moan to your mind boggling conversations, know you have met the wrong or right address. But if you still want to go the extreme left of gathering resources for Mills and Boons from a conversation with a lady, check her background before enlisting her as your co-author. There are some neutral conversation starters, I should give you examples? Ask us about our hobbies, career, academics, Yes.  Exhausted the list? Really? Then, Ask google. Thanks.

When you want to avoid sexually-themed conversations with I-DON’T-KNOW-YOU-FROM ANYWHERE Guys and I-CAN’T- HAVE SUCH CONVERSATIONS WITH YOU Guys , and they press on and guys brand you as being childish and stop being a kid, or “You are not a kid” I say in my head, – Neither is My dad a He-Goat.

For unlike Shatta Wale, you don’t know your level. Speaking for the one, I am not a hypocrite, it is about behaving the right way at the right time with the right person at the right place. Know your level so we have a level playing field. Know your place. It doesn’t mean we are not sexual beings or we don’t get turned on, or we don’t get attracted to the opposite sex. We do. I do. Apart from that, I love to write. To paint with words even things I have never before experienced is one of my favourite forms of meditation. And that means, sexually provoking conversations, I can engage in them. My characters in my non-fiction short stories are actors, so I strive to create realistic characters. How much more real feelings and experiences? I can garnish them. Well well.. The fact that apart from religion, sex is the most written about subject in the world does not escape my pens. It’s just that most of my sexually provocative writings are customised for now. So every normal person thinks about sex. Then why do we complain when sex is offered on a silver platter? This makes me wish for those guys or ladies (Who are straight) to be approached by a gay person asking for sex or even relationship during your first few meetings. And pressing you to agree. Yes. Eeeewwwwwweee. Disgusting huh? That is how it feels for us too.

A little on John Dumelo’s Vals day visit to single girls on Legon Campus. I don’t know his motive behind his visit. However, imagine a girl or lady who refuses to warm up to Dumelo because she doesn’t just feel it. People around her are going to brand her as a kid, criffe, hipo,etc. It seems like I am talking of Disrespect in terms of only sexual issues. However, I am an advocate for equal respect for both sexes in Academia, Career, home, friendships, intimate relationships, in word. and Until we have a grand meeting, let’s keep the conversation going off and on social media especially on this platform. Enjoy Mama Maya;  And Still I Rise

Drop your comments, suggestions, experiences and your opinions.

This is a text widget. The Text Widget allows you to add text or HTML to your sidebar. You can use a text widget to display text, links, images, HTML, or a combination of these. Edit them in the Widget section of the Customizer.